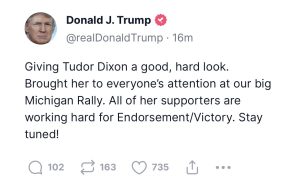 Dixon appeared on “The Steve Gruber Show” on Friday just minutes after Trump’s post appeared on social media. “He’s the most powerful person in the Republican Party and he has the biggest influence,” Dixon said. “We would be honored to have his endorsement in this race.”

This potential endorsement comes on the heel of a letter sent by nine Trump-endorsed GOP candidates who asked the former president not to be involved with DeVos-backed candidates in Michigan. Although not mentioned specifically in the letter, Dixon has been endorsed by the DeVos family.

In the letter, the candidates wrote, “The DeVos family and their affiliated organizations are spending hundreds of thousands of dollars – possibly millions – trying to defeat Trump-endorsed candidates across the state. There is a war going on for the soul of the GOP in Michigan with Trump-endorsed candidates on one side and the establishment DeVos family on the other. We look forward to victory on August 2nd despite their very well funded attacks.” 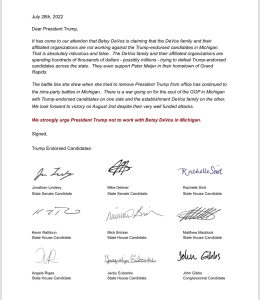 Kevin Rathbun who is running for a House seat in Michigan’s 71st district signed the letter. “We’re getting attacked by the DeVos family,” Rathbun told Michigan News Source. “She’s dumped $30,000 to $40,000 into my opponent’s campaign.”

When asked how a victory for his campaign on Tuesday, along with Dixon’s win could affect his campaign strategy, he replied, “It won’t change my approach.”