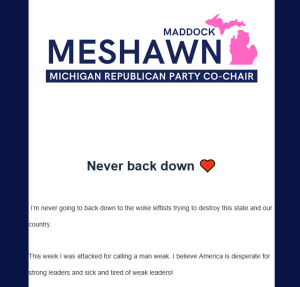 Maddock’s comments last week referenced Buttigieg who has moved to Northern Michigan with his husband and children. Michigan News Source reached out to Maddock earlier this week for a comment and she did not respond.

She missed the point of what got people irritated. She made an unnecessary and derogatory comment. That’s all

Yes, “weak” was the part of the phrase that people took issue with 🙄

Several Republicans have denounced Maddock’s comments and criticized her for making a derogatory comment about Buttigieg’s sexual orientation and gender rather than his public policy record.

The Michigan GOP is attempting to look forward as its leadership flounders. GOP gubernatorial candidate Tudor Dixon will rally with former President Donald Trump in Warren on October 1.

The general election is November 8.