Kristina Karamo: ‘I Don’t Interview with Media Entities Not Honest About Their Bias’

DETROIT (Michigan News Source) – GOP Secretary of State candidate Kristina Karamo is pushing back against two major Michigan news outlets, saying a sit-down interview with their reporters offers “zero chance of a fact-based interview making it through their bias and out to the public.” 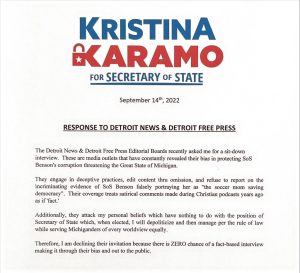 The Detroit News has been back and forth on social media with Karamo this week.

I believe the @detroitnews has multiple interview requests in with your campaign.

Still waiting to hear back on those. https://t.co/GDS0WbTU9u

We’ve had TWO press conferences, media advisories were sent @CraigDMauger, and you and any member of the press were welcome to attend, and ask whatever questions you like. Also I have been at multiple events where YOU could have approached me and interviewed me there. Be honest. https://t.co/wjx4XcVRQX

In August, Michigan News Source wrote a profile article on Karamo and her opponent, Secretary of State Jocelyn Benson. Both campaigns were polite and easy to work with.

The general election is November 8, and early voting begins September 29.