LANSING, Mich. (Michigan News Source) – The announcement of Gov. Gretchen Whitmer’s 11-person Parents’ Council on Monday comes on the heels of bad press between her administration and the Michigan Department of Education (MDE).

Last week, the MDE released training videos that instructs teachers how to help children sexually transition and appears to recommend that teachers hide a child’s “chosen name and pronouns” from their parents. In addition, it recommended hiding information even if the child is suicidal.

A list of the videos can be viewed here.

“What is wrong with these people? Make no secret about it – our own state agency is being weaponized to actively recruit our kids and advance their radical gender theory with zero input from parents,” Dixon said in a press release.
“My position is very clear: Our schools need to stop pushing radical sex and gender theory and instead get back to teaching kids how to read, write, and do math.”

The leak of the training videos prompted a response from Michigan’s Chief Operating Officer Trish Foster who sent this letter to State Superintendent Dr. Michael Rice. 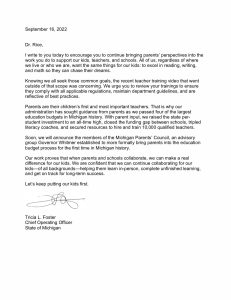 Foster is no stranger to providing stop-gap measures to bad press. In April 2021, Facebook photos posted by Foster showed her vacation in Florida despite Gov. Whitmer’s strict orders to stay home from spring break trips to stop the spread of COVID-19.

“Parents are their children’s first and most important teacher, and we need their input to help our kids thrive in school,” said Gov. Whitmer in a press release.

Those who applied but were not selected for the 11-person council received a rejection letter which boasted Whitmer’s goal of creating a “diverse group of experts and community leaders.”

Below are the council members: